While auditing the security of embedded devices we often face situations where the firmware of the system under test is either not publicly available or the vendor can’t provide it due to legal issues. Accessing the firmware gives a lot of insight on how the device actually works. Even in assessments, where scope is limited to Web Application Testing only, helpful information can be gathered by having access to the firmware.

This blog post depicts the general approach for retrieving the firmware from such devices by accessing the flash memory chip directly. Please note the provided information in this example is limited to the flash memory chip only, as the tested system cannot be disclosed due to legal constraints.

After opening the housing of an embedded system the initial step is to identify integrated circuits (ICs) that are potential candidates for holding the firmware of the device. As this is highly device-specific the assumption here is that you already have acquired access to the bare PCB.

In the following we use the Spansion S25FL128 as an example, which is in broad use for home routers, cable modems and the likes. 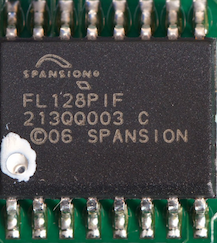 To understand how the integrated circuit communicates the next thing to do is looking up the datasheet. Most vendors provide detailed and freely available information about the package, pinout and protocol used by the chip.

In case of the Spansion S25FL128 the following information can be gathered from the datasheet:

Knowing the characteristics of the Spansion S25FL128 we are able to proceed with interfacing the chip in order to access and hopefully read its content.

The Spansion S25Fl128 [2] uses Serial Peripheral Interface bus (SPI), which is a synchronous serial communication interface that is used for short distance communication and often found in embedded systems.

As we are going to read/dump data from the Spansion S25Fl128 we act as bus master with the flash chip being a SPI slave.

We are going to read the content while the Spansion S25Fl128 is still soldered on the board using a IC test clip such as the Pomona 5252:

In general it’s recommended to desolder the integrated circuit from the board so that no other component can access it and therefore prevent us from actually dumping the memory. Although we might power other components as well that is a less time-consuming approach and should be tried first.

The following pinout details the bare minimum of mandatory connections (highlighted in red) needed to access the Spansion S25FL128. 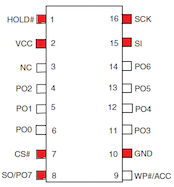 As a rule of thumb pay attention to connecting all pins according to the datasheet and leave no pin floating.

In order to dump the content of the chip, we hookup the aforementioned seven pins to the Spansion S25Fl128 using a Raspberry Pi 3 according to the following table: 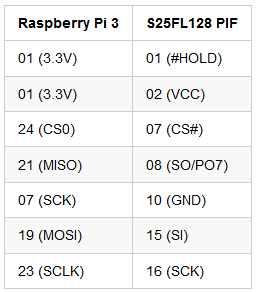 The Raspberry Pi 3 is a cheap system that supports SPI and even
allows us to provide power to the Spansion S25Fl128. Of course you can
make use of other dedicated SPI programming devices as well.

Using flashrom [1] we now try to dump the content of the chip using the SPI device (/dev/spidev0.0) provided by Raspberry Pi 3 as follows:

Note that we stated spispeed=8000 explicitly, which sets the SPI speed in kHz and was found to be the maximum speed the Raspberry Pi 3 can handle although your results may vary. This heavily reduces the amount of time needed to dump the entire flash content.

It can be seen from the output above that flashrom fails to identify the integrated circuit unambiguously. As we have identified the specific version in use beforehand we can provide flashrom with the relevant chip identifier using the command-line flag -c:

It is highly recommended to dump the image multiple times to verify that the checksum stays the same, which normally indicates a successful read:

A quick look on the acquired firmware image suggests that we have valid data at hand and that this data is unencrypted. Because strings in the dump indicate that uboot is present: 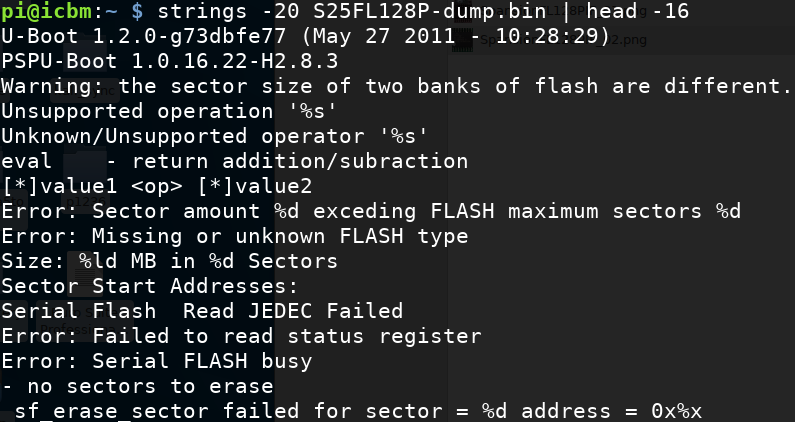 This blog post tried to shed some light on the general approach to access SPI NOR flash memory that often can be found in embedded devices. It might be followed by a complete walkthrough of an analysis in the future.